An audio visual and digital tech celebration of timeless solutions

The holidays come early in June for electronics aficionados, in the massive gift known as the InfoComm conference. This year did not disappoint. Another record-breaker featuring more than 1,000 exhibitors and 40,000 attendees from 100 countries, across 545,000 square feet of exhibit space and 24 audio demo rooms. The atmosphere at Orlando’s Orange County Convention Center sizzled as the tech world converged for four-days of audio visual fireworks.

Let’s see what’s under the InfoComm 2017 tree; this colorful array of new and innovative products sets the tone for the rest of the year (as well as holiday shopping!). 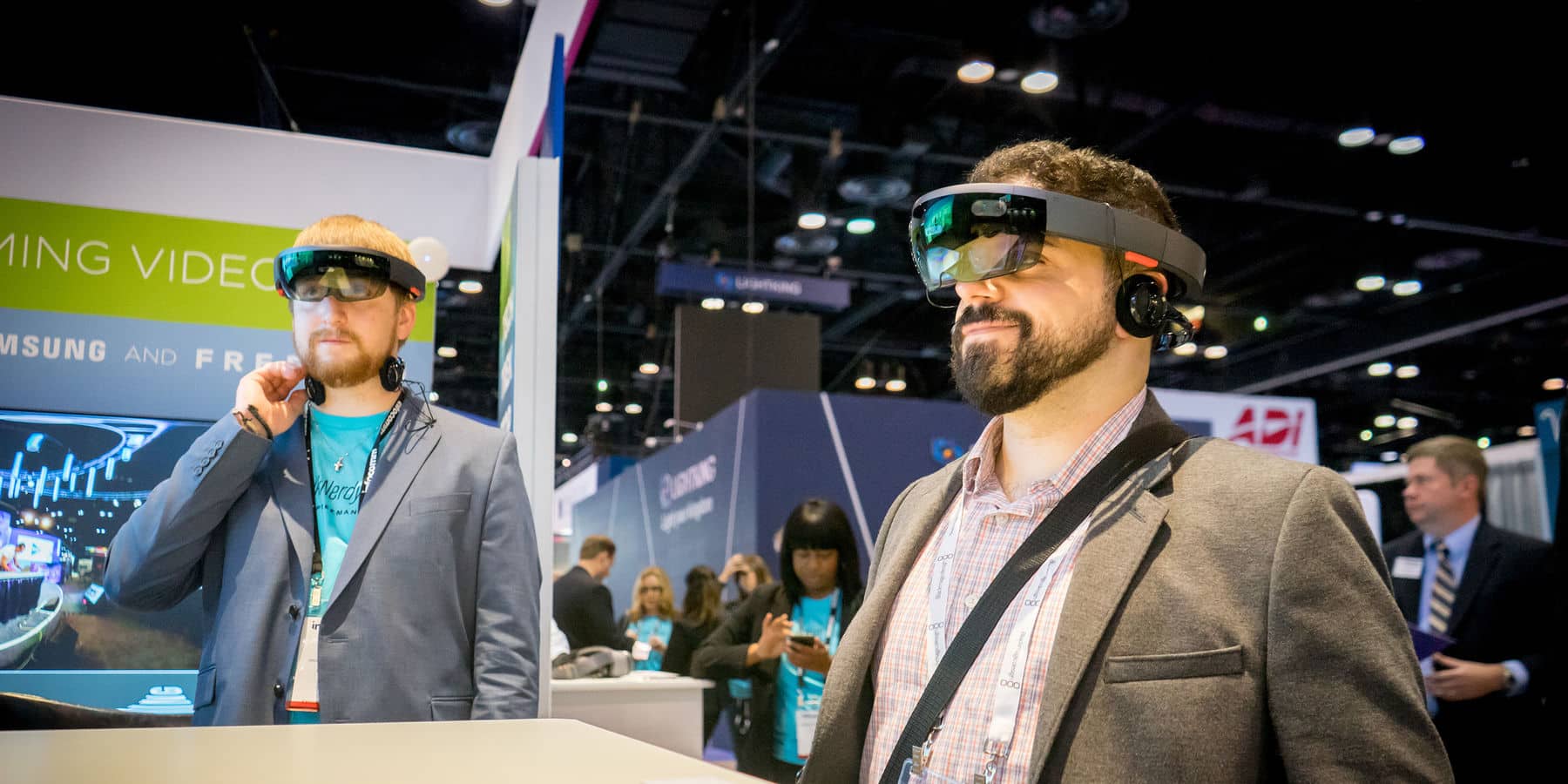 Virtual reality is a staying reality

Virtual reality gained major marketing steam in 2016 thanks to major players like Google and Facebook, but it really crashed the tech party at the CES and PCMA brand experiences in January. That wasn’t too long ago, but since then VR has already rapidly evolved into a core tech solution for various industries. At InfoComm 2017, in the appropriately-named display, Immersive Technology Experience, VR verified its broad yet practical capabilities across many verticals like healthcare, education, architecture, public safety, and more.

Freeman provided hands-on VR demos and walkthroughs, including high-profile presentations such as a jet fighter simulation and a sensory tour of a NASA space suit paired with a stunningly realistic simulation of an astronaut spacewalk. These virtual experiences revealed the potential of highly effective and safe training that can save costs when replacing physical simulations. On the other hand, some VR presentations offered pragmatic solutions like a photorealistic European apartment for architects and designers. The virtual sky was the limit at the conference, and the presentations attracted hundreds of attendees and their imaginations.

Augmented reality, VR’s Pokémon-friendly cousin, also made a virtual splash at InfoComm. One illustration was a Microsoft version of the new HoloLens that displayed optimized 3D models of the human anatomy, the human heart, and an MRI machine — allowing users to be immersed in unchartered worlds while also seeing the potential for other medical explorations. The solution was designed as one of many cases showing how this tech can enhance learning environments.

It would be impossible to document all the tech goodies at InfoComm 2017, even in one War and Peace-sized book. There were, though, many significant trends and standouts. For instance, distributing video over networks was showcased by many companies — not surprising considering how social media and online streaming have become so crucial for brands. That high-quality video signal over a network also can benefit exhibits, digital signage, breakout rooms, and other settings.

Ultra-short throw projectors utilizing built-in lenses or new lenses to fit existing machines were prevalent at the event — as were laser light source projectors.  At least three different exhibitors, including Canon, Panasonic, and the UNC School of Media, featured wide-coverage lenses able to project images on a dome for immersive, planetarium-style displays. On the audio technology front, the most striking advances centered on different methods for audience experience, including new format speakers like the K-Array Anakonda flexible array element.

Geeking out even more with audio visual, one salient trend on the horizon is the adoption of Dante: One cable that does it all. Dante replaces heavy, expensive analog or multicore cabling with low-cost, accessible category or fiber optic cable. It integrates media and control for an entire system over a single, standard IP network; it can easily scale from a seamless pairing of a console and a computer to large networks with thousands of audio channels. What’s more, Dante’s use of logical routes instead of physical point-to-point connections allows the network to be expanded and reconfigured with just a few mouse clicks.

When it came to merging audio and visual, the most impressive tech may have come from Sony. The company presented a demo of new sound field technology that could be highly useful in exhibitor sound applications or interactive poster tours. Three different displays along a wall showed three different video streams. A long row of speakers ran along the top of the displays and was obscured by a seamless speaker grille. As the attendee moved from one display to the next, the sound from neighboring displays silenced — even though the audio streams continued. Standing between two monitors left the viewer in a “dead zone” where almost no audio was heard. The demonstrator could also “move” sound around the room by tapping a diagram on his tablet.

The Sony product is a prototype, mind you, but that doesn’t mean audio visual enthusiasts should put away the caroling bells. A parallel tech was offered by several utilizing Soundscapes Processing, which leverages psychoacoustics (smoothly moving audio around a space). In short, sounds follow the visuals on a screen in relation to the audience. In one demo, a video of a jazz band lead by a female vocalist wowed audiences as every note fluctuated depending on the position of the listener. Essentially, the performance sounded live!

Beyond offering immersive experiences, this new generation of audio systems minimizes listener fatigue and actually increases attention — the hardest thing to maintain in the digital revolution. Now that’s a present that will keep on giving for brand experiences.

Not everything at InfoComm 2017 was about getting a visual on the latest tech. Audiences were additionally rewarded with a vision of rising technology and ideas, and how they will continue to assist the business world. Case in point: The Innovation Showcase promoted the best from smaller exhibitors and startups. The conference also inaugurated TIDE (Technology. Innovation. Design. Experience.), a thought-leadership event for exploring the strategic effect of audio visual tech and the role of the AV industry in business.

Remarkable speakers packed sessions of InfoComm 2017. The keynote included Matthew Luhn, one of the original story creators at Pixar, and Nonny de la Peña, virtual reality pioneer. Both speakers stressed the importance of storytelling, even in highly technical and dry verticals. Let’s face it: more than ever, stories are what bring humanity to the digital revolution. And humans greatly reward brands that feel, well, human.

As with The Innovation Showcase, InfoComm 2017 was a haven for the expression of up and coming thought leaders, and this included speaker sessions. Another new initiative, Center Stage, offered a sequence of 20-minute talks on the show floor by tech practitioners, end-users, researchers, and fledging entrepreneurs. Topics covered environmental technology and design integration across diverse fields including healthcare, entertainment, education, and hospitality.

Let’s not forget InfoComm’s countless rewarding sessions. One of the most noteworthy, “UCC State of the Industry Lunch and Learn,” featured panelists who sought to improve the audience experience. This topic is essential in our industry, as one panelist explained that only four percent of meeting spaces in the world provide video functionality. That might seem ironic considering where the statement was said, but obviously a tremendous opportunity for marketers and audio visual providers to come together for the sake of better experiences.

InfoComm 2017 offered gifts for just about everyone this year. The tech solutions and breakthroughs presented will make a positive impact across industries today and far into the future.

Back to Blog
We use cookies on our website to give you the most relevant experience by remembering your preferences and repeat visits. By clicking “Accept”, you consent to the use of ALL the cookies.
Cookie settingsACCEPT
Manage consent

This website uses cookies to improve your experience while you navigate through the website. Out of these, the cookies that are categorized as necessary are stored on your browser as they are essential for the working of basic functionalities of the website. We also use third-party cookies that help us analyze and understand how you use this website. These cookies will be stored in your browser only with your consent. You also have the option to opt-out of these cookies. But opting out of some of these cookies may affect your browsing experience.
Necessary Always Enabled

Any cookies that may not be particularly necessary for the website to function and is used specifically to collect user personal data via analytics, ads, other embedded contents are termed as non-necessary cookies. It is mandatory to procure user consent prior to running these cookies on your website.